A little over a week after the Merge, preparations begin in Ethereum for a process that will modify the operation of the network. But not only developers and those who run Ethereum nodes must take certain precautions, but also users and holders of its native cryptocurrency, ether (ETH). The Merge, also called “fusion”, is the process that will culminate the transition of the Ethereum that we know to a new version. As explained in other CriptoNoticias posts, the merge should not in any way affect the assets hosted on Ethereum. In case of a fork (“fork”), these could be duplicated, but they would still exist in Ethereum 2.0.

Leaving your ETH in an Ethereum wallet is the safest

First of all, it is appropriate to note that the Ethereum Foundation itself clarified that Ethereum holders and users do not need to do anything to prepare for the Merge or after it happens. Regardless of the consensus algorithm change, the network accounting will remain intact from its genesis.

By having the funds in a self-custody walletno risk of any kind. Some examples of these wallets are Metamask, Trust Wallet, Defiant and Nifty, although there are many more.

As the mainnet merges with Beacon Chain, it will also merge all of Ethereum’s transactional history. You don’t need to do anything. Your funds are safe. Ethereum Foundation.

Secondly, apply the same criteria for those who have funds in second layer scalability solutions such as Arbitrum, Optimism or ZKSync. As long as they have their funds in secure wallets, nothing should happen to them. Of course, they will not receive tokens from a possible fork if they have their ETH in second layers, as those who have funds in the main layer will. Finally, the question is different for those running nodes (validators or non-validators) of Ethereum. In those cases, there are certain necessary updates and other details to be aware of which are outlined on the Ethereum Foundation site.

Do not move funds during the Merge

In addition to keeping the money in a self-custody wallet, it is important to be careful not to move it during the duration of the Merge, in case some unforeseen event occurs. This process should complete in approximately 10 minutes. Taking into account that an Ethereum transaction can take a long time if the network is congested, it is even advisable not to make movements for several hours before the Merge.

Various cryptocurrency exchanges (such as Binance, FTX and Bitso, among others) they announced that they will suspend the movements the ETH from a few hours before the Merge until after the process is finished. The idea is to prevent unsuspecting users from risking losing their funds by moving them when the network is in full transition.

The same recommendation applies to second layer scalability solutions., who are also making the decision to suspend fund movements before, during and after the Merge. This was reported by ZKsync, and it is very likely that other rollups will too. In any case, It is not recommended to leave the ETH in exchanges while the Merge is taking place. The reason is that these are centralized entities that can withhold funds or freeze movements for a discretionary time.

Major stablecoins will continue on Ethereum 2.0

If you have savings in stablecoins, you should rest easy. With those tokens you should take the same precautions as with ETH and not send during the Merge. You can then continue to use them normally. Regardless of whether or not there is an Ethereum fork, major stablecoin issuing companies Tether and Circle confirmed that will support the network with proof of participation (Proof of Stake or PoS). Likewise, the decentralized protocol Maker (issuer of the DAI stablecoin) will do the same. In this way, you should know that these stablecoins will have “official” support and that you don’t need to do anything with them before the Merge, beyond protecting them in a secure wallet. Something similar happens with non-fungible tokens (NFT). While these tokens would double in the event of a fork, the ones backed by their issuers (platforms like Opensea, for example) will be the “real” ones. Most likely, the ones with that backing are those minted on the network with PoSthat is, Ethereum 2.0. So shall in the case of the already named Opensea, the main Ethereum NFT market.

When there is uncertainty about an issue and the course of action to follow, that is when opportunists want to take advantage. That’s why, you have to be especially attentive with offers of help and recommendations that are received before the Ethereum Merge. 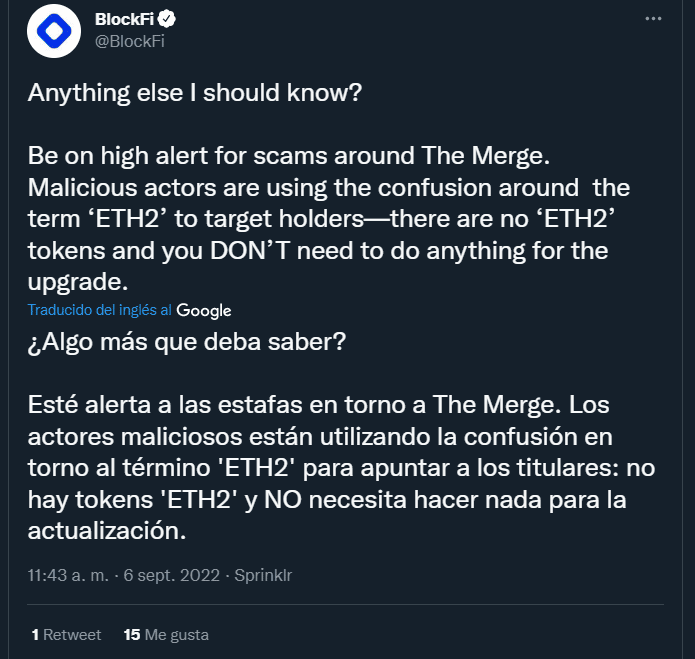 Various exchanges and wallets alert on Twitter about possible scams before the Ethereum Merge. Source: Twitter/@BlockFi. There are many myths and false concepts circulating these days. You should know, for example, that there is no cryptocurrency called ETH2.0 or anything like that. The cryptocurrency of Ethereum 2.0 will continue to be ether, as it has been until now. Therefore, if someone offers advice to “migrate” the funds to the new network, be careful. In any case, If there were to be a fork of Ethereum with PoW, its token could be called ETHPoW. In fact, several exchanges already allow trading with that token (a purely speculative type of trading for now), but it has nothing to do with the native Ethereum cryptocurrency.

Do not send your ETH anywhere in an attempt to ‘upgrade to ETH2’. There is no ETH2 token and there is nothing else you need to do to keep your funds safe. Ethereum Foundation.

Finally, a possible fork could lead to the sale of duplicate NFTs on the forked network. As explained, these would not have the endorsement of the issuers of the original NFT (in the PoS network), so it would not be an authentic NFT.